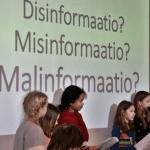 You can start when children are very young, said Kari Kivinen. In fact, you should: “Fairytales work well. Take the wily fox who always cheats the other animals with his sly words. That’s not a bad metaphor for a certain kind of politician, is it?”

With democracies around the world threatened by the seemingly unstoppable onslaught of false information, Finland – recently rated Europe’s most resistant nation to fake news – takes the fight seriously enough to teach it in primary school.

In secondary schools, such as the state-run college in Helsinki where Kivinen is head teacher, multi-platform information literacy and strong critical thinking have become a core, cross-subject component of a national curriculum that was introduced in 2016.

In maths lessons, Kivinen’s pupils learn how easy it is to lie with statistics. In art, they see how an image’s meaning can be manipulated. In history, they analyse notable propaganda campaigns, while Finnish language teachers work with them on the many ways in which words can be used to confuse, mislead and deceive.

“The goal is active, responsible citizens and voters,” Kivinen said. “Thinking critically, factchecking, interpreting and evaluating all the information you receive, wherever it appears, is crucial. We’ve made it a core part of what we teach, across all subjects.”

The curriculum is part of a unique, broad strategy devised by the Finnish government after 2014, when the country was first targeted with fake news stories by its Russian neighbour, and the government realised it had moved into the post-fact age.

Successful enough for Finland to top, by some margin, an annual index measuring resistance to fake news in 35 European countries, the programme aims to ensure that everyone, from pupil to politician, can detect – and do their bit to fight – false information.

“This affects all of us,” said Jussi Toivanen, chief communications officer for the prime minister’s office. “It targets the whole of Finnish society. It aims to erode our values and norms, the trust in our institutions that hold society together.”

Finland, which declared independence from Russia in 1917, is on the frontline of an online information war that has accelerated markedly since Moscow annexed Crimea and backed rebels in eastern Ukraine five years ago, Toivanen said.

Resistance is seen almost as a civil defence question, a key component in Finland’s comprehensive security policy. Toivanen said: “We are a small country, without many resources, and we rely on everyone contributing to the collective defence of society.”

Could language be the key to detecting fake news?

The programme, piloted by a 30-member, high-level committee representing 20 different bodies from government ministries to welfare organisations and the police, intelligence and security services, has trained thousands of civil servants, journalists, teachers and librarians over the past three years.

“It’s a broad-based, coordinated effort to raise awareness,” said Saara Jantunen, a senior researcher from the defence ministry who has been seconded to the prime minister’s office. “Like virus protection on your computer: the government’s responsible for a certain amount, of course, but ultimately it’s up to the individual to install the software.”

For Kivinen, who returned to Finland after a career in international education to head the French-Finnish school in Helsinki and pioneer the information literacy programme in schools, no one is too young to start thinking about the reliability of the information they encounter.

“Kids today don’t read papers or watch TV news, which here are OK,” he said. “They don’t look for news, they stumble across it, on WhatsApp, YouTube, Instagram, Snapchat … Or more precisely, an algorithm selects it, just for them. They must be able to approach it critically. Not cynically – we don’t want them to think everyone lies – but critically.”

Fake news, Kivinen said, is not a great term, especially for children. Far more useful are three distinct categories: misinformation, or “mistakes”; disinformation, or “lies” and “hoaxes”, which are false and spread deliberately to deceive; and malinformation, or “gossip”, which may perhaps be correct but is intended to harm.

“Even quite young children can grasp this,” he said. “They love being detectives. If you also get them questioning real-life journalists and politicians about what matters to them, run mock debates and real school elections, ask them to write accurate and fake reports on them … democracy, and the threats to it, start to mean something.”

He wants his pupils to ask questions such as: who produced this information, and why? Where was it published? What does it really say? Who is it aimed at? What is it based on? Is there evidence for it, or is this just someone’s opinion? Is it verifiable elsewhere?

Even quite young children can grasp this. They love being detectives. Democracy, and the threats to it, start to mean something

On the evidence of half a dozen pupils gathered in a classroom before lunchtime, it is an approach that is paying off. “You must always factcheck. The number one rule: no Wikipedia, and always three or four different and reliable sources,” said Mathilda, 18. “We learn that basically in every subject.”

Lila, 16, said she had grilled local politicians for a live panel discussion on the local radio station. Alexander, 17, said he had learned a lot from devising a fake news campaign. Asked why fake news mattered, he said: “Because you end up with wrong numbers on the side of a bus, and voters who believe them.”

Priya, 16, said education was “the best way to fight it. The problem is, anyone can publish anything. There’s not much a government can do when they’re faced with big multinationals like Google or Facebook, and if it does too much it’s censorship. So yes, education is what’s most effective.”

Part of that continuing education is also provided by NGOs. Besides operating an effective factchecking service, Faktabaari (Fact Bar), launched for the 2014 European elections and run by a volunteer staff of journalists and researchers, produces popular voter literacy kits for schools and the wider public.

“Essentially, we aim to give people their own tools,” said its founder, Mikko Salo, a member of the EU’s independent high-level expert group on fake news. “It’s about trying to vaccinate against problems, rather than telling people what’s right and wrong. That can easily lead to polarisation.”

In the run-up to Finland’s parliamentary elections last April, the government went so far as to produce an advertising campaign alerting voters to the possibility of fake news, with the slogan “Finland has the best elections in the world. Think about why”.

Similarly, Mediametka has been developing and working with media literacy tools since the more innocent days of the early 1950s, when its founders were motivated mainly by fear of the irreparable damage that comic books might do to the minds of Finnish children.Advertisement

These days, the NGO, part-funded by the culture ministry, organises ed-tech hackathons with inventive Finnish startups in a bid to develop “meaningful materials” for schools and youth groups, said its executive director, Meri Seistola.

“We work with pictures, videos, text, digital content; get our students to produce their own; ask them to identify all the various kinds of misleading news,” said Seistola: from propaganda to clickbait, satire to conspiracy theory, pseudoscience to partisan reporting; from stories describing events that simply never happened to unintentional errors of fact.

Finland has something of a head start on information literacy, ranking consistently at or near the top of international indices for press freedom, transparency, education and social justice. Its school pupils have the EU’s highest PISA score for reading.

“The level of trust in national institutions, in the media, in society as a whole, does tend to be higher in the Nordic countries than in many others,” said Faktabaari’s Salo. “But that means we really need even greater vigilance now, to prepare ourselves for the next phase. Because we have more to lose.”

This article is part of a series on possible solutions to some of the world’s most stubborn problems. What else should we cover? Email us at theupside@theguardian.com